MP for Bournemouth West
Conor was born in Belfast in 1972 and his family moved to Hertfordshire in 1980.  After secondary school in St Albans Conor attended Southampton University where he studied Modern History and Politics. Since graduation he has had a variety of jobs working in the communications and finance sectors.

He was Company Secretary and Head of Business Development for successful information services company in London and later briefly ran the direct sales force in the southern region for a large insurance company.  Most recently he has been working for a large private company on the south coast as well as a communications company in London. He is on the board of the Spitfire Tribute Foundation which is working to construct a permanent monument to the Spitfire in the city of its birth.

He collects biographical books and loves spending time exploring second hand book shops. A keen swimmer Conor regularly goes to the gym in Poole and also enjoys walking in the countryside. Conor also loves to watch snooker and despite the relentless mickey taking by his friends he goes up to Sheffield to watch some of the world championship each year.

Conor is also very involved in several charities and takes his commitment to these very seriously.  Conor is on the management team of a Home Start scheme that helps families struggling with the demands of everyday life

Conor joined the Conservative party at the earliest age possible and became politically involved at school.  On arriving at University Conor got involved with the Southampton University Conservative Association becoming Chairman in 1992.  He was elected to Southampton City Council in 1999 taking what had previously been a safe inner city Labour seat. He immediately became Housing and Urban Regeneration Spokesman.  His St Luke’s Ward was abolished and having become Group Leader he moved at the last minute to another ward.

The thing Conor most enjoys about politics is the opportunity it gives him to take up people’s problems and try to make a difference in their lives. 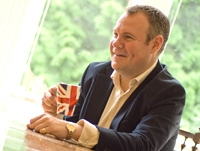 A link to Conor's website can be found at www.conorburns.com

A link to Conor's Conservative Biography can be found here